There are twenty-two letters in the Hebrew Aleph-bet (alphabet). This brief overview will define three of them, Aleph, Bet and Gimel, and go over the basics of their mystical interpretations. In Mormon Kabbalah, these letters are used for spiritual communication in ways that do not require one to be fluent in the language. These letters help us gain a direct spiritual communication going beyond mere words. Meditation with the letters is a common practice in Kabbalah to help facilitate spiritual growth.

While reading through this, look for the deeper meanings of each letter. All are also encouraged to study outside resources to deepen our understanding beyond what this simple text provides. As Kabbalists study and meditate over the years, we gain greater incites to the inner spiritual meanings of the letters. 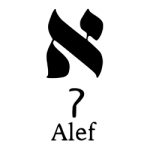 Aleph (or alef, or alif) is the first letter of the Hebrew Alphabet. It signifies the number one, or 1,000 when referring to years. Aleph shows us the Oneness and Unity of God, either as the trinity, one God acting as many, or as the Godhead, many Gods acting as one. The unity of God cannot be divided. This perfect unity, being one as Christ pleaded for his disciples to be one, represents perfection beyond human comprehension (John 17:11). It also represents the fact that God, as the Creator, is the source of everything.

You may notice that some draw Aleph is two Yods; one above and one below, with a diagonal line, Vav, between them. This represents the sealing power: as above so below, as below so above, as Christ ask in his introductory prayer (Matthew 6:9-13). This teaches us that the higher world and the lower world are connected. Aleph is the essential symbol of beginnings: the Alpha. Jewish Kabbalah ties aleph to the element of air, and thus El Abba and Da’at. It signifies the path between Keter and Chokhma in the Tree of Life. Aleph also represents the Fool in the tarot’s major arcana. It is said by the Midrash that Aleph is humble, because though it is the first letter, it was not the letter to start the Torah. 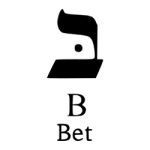 Bet (or Beth, or Beh, or Vet) is the second letter of the the Hebrew Alphabet. It signifys the number two. Bet is the first letter of the story of creation, starting the entire Torah with Bereshit; “In the beginning…” Thus Bet represents duality; a Creator and the created, a giver (God) and a receiver (the creation). This duality creates the possibility for opposites; good and evil, heaven and hell, hot and cold, yes and no, man and woman, etc.

Bet literally means house, and even looks like a type of dwelling. It is used to represent our kli, vessel that holds darkness until filled by God’s light. Within us it represents the “house” or temple of the Holy Spirit (1 Corinthians 3:16).  According to Jewish legend, Bet was chosen by God to begin the Torah. Thus Bet is the tool bringing forth all of the other letters, which is to say first we build a temple for the Holy Spirit, then his fire cleans us and helps us grow in Christ’s grace. 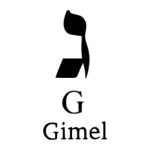 Gimel is the third letter of the Hebrew Alphabet. It signifies the number three. Bet represents duality, which can create conflict, thus Ghimel becomes the resolution, the harmonizing of opposites. Aleph is the oneness of God, Bet the Father and Mother, Father and Son, Father and Mother, Christ and the Holy Spirit, etc. Ghimel links and balances these, creating the trinity or Godhead. Now we can see the Father & Mother, Son, and Holy Spirit.

Ghimel is the balance between opposing powers, a letter of constant transformation. It is the change within us as we grow in Grace. It translates literally as “camel,” an animal humans use for travel. Thus, it carries us on our journey (teshuvah) back to God. Ghimel also introduces us to the opposites of giving and receiving, reward and punishment. It gives us both a balance and motion between these opposite ideas. It represents dual ideologies such as kindness and cultivation.

It is said that Ghimel is shaped like a foot to represent a rich man running after a poor man to give him charity. This can be both God as the rich man giving us charity in salvation, or a human following God’s command to selflessly give of all we have (Mosiah 2:28-36 RAV, 4:16-21 OPV).

Pardes and the Orchard of Kabbalah

The Aleph-bet: Dalet, Hei, and Vav