Upon you my fellow servants, in the name of Messiah, I confer the Priesthood of Aaron, which holds the keys of the ministering of angels, and of the Gospel of repentance, and of baptism by immersion for the remission of sins; and this shall never be taken again from the earth, until the sons of Levi do offer again an offering unto the Lord in righteousness.” -Avahr 21:3-5

In the Church of Jesus Christ anyone may be called to the ministry from any walk of life. This brief overview has been created to help those seeking to know God’s will for them, in their ministries, as Priests.

Within the Church of Jesus Christ in Christian Fellowship, there are two priesthoods ministers may be called to: the Low Priesthood and the High Priesthood. The Low is called the Levitical Priesthood, or in the Book of the Law of the Lord, the Priesthood of Life (BoL 36:1, 11). For those that identify as male this would be in the Brotherhood of Aaron or the Aaronic Priesthood, and for those that identify as female the Sisterhood of Miriam or the Miriamic Priesthood. The Levitical Priesthood is for those called to serve the Church and preform outer ordinances. They also teach the Gospel and assist the High Priesthood in their duties. Their role is to prepare the earth for the coming of the heavens. The keys of the Priesthood give us access to true powers from God.

The Priest and Priestess, known in Hebrew as a Kohen (male; plural, Kohenim) and Kohenet (female; plural, Kohanot), are men and women that have been called and set apart to meet the spiritual needs of the Church as minsters and singers (BoL 32:2). Priests and Priestesses are called to “preach, teach, expound, exhort, baptize, and administer the Sacrament; to visit the house of each member, and exhort them to pray vocally and in secret, and also to attend all family duties; to ordain other Priests, Priestesses, Teachers, and Deacons, and take the lead in meetings” (DoS 2a:48-50, 6a5, 9:19, 53a:59). They are to strengthen members in Christ and strive to keep the peace by teaching truth and and encouraging love and kindness (DoS 2a:52). Where there is no Elder, High Priest, or High Priestess the Priest or Priestess leads meetings, and a Priest or Priestess may be chosen and sustained to preside over a branch or synagogue (DoS 2a:51, 6a:5). Priests and Priestesses have duties in the temples, including moving and cleaning sacred objects (BoL 10:4, 32:2). 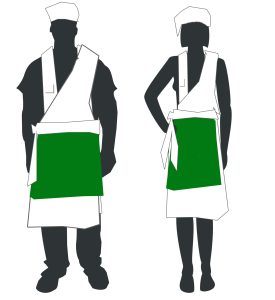 Priest and Priestess is the Third office or Degree of the Levitical Priesthood and a calling. Once ordained, these brothers and sisters should be initiated and given their new name and their garments, if they were not given such as Deacons. Because theirs is the Second Endowment, they should have been given the first token of the Levitical Priesthood, its name, and its sign when they were ordained Deacons or Teachers. With these they were given the apron and gartel to wear over their garments and the miznefet, a hat that does not cover the face or ears (DoS 15e:7, 114:27). Now they are given the robes of the priesthood and should wear these when acting in their duties (DoS 15e:11-21, BoL 39:2b). When gathered as a quorum they are to welcome one another with their signs and tokens (DoS 15e:9-10).

Generally, in the Fellowship a Priest or Priestess should reach the Third Degree of Teacher before advancing to the office of Priest or Priestess. Those called directly to the office of Priest of Priestess should be given time between the First and Second Endowments so that they can learn to use what they are given. Courses from the School of the Prophets ensure that those called to be  Priest, Priests, or to an office in the High Priesthood understand their duties. All Priests and Priestesses are to preach repentance and remission of sins to all nations (BoL 11:3b).

Types of Priests and Priestesses

“Of Priests, of the Priesthood of life, there shall be a Chief Priest, a first and second High Priest, and a Leader of each Course of Priests, to every Temple. This Priesthood shall be divided into Courses, according to the nature of their duties; and officers appointed in the several Courses, to guide and direct in the duties of the Course. In organizing the Courses, those may be included who have been ordained to a higher Priesthood.” -Book of the Law of the Lord 36:12-13

“ In every city, town, and village, ye shall ordain Teachers, men and women who are apt to teach, learned in letters, and in every science, and every manner of wisdom and knowledge; that they may instruct you and your children, and that you may attain to all wisdom and all knowledge.” -Book of the Law of the Lord 33:1

Pardes and the Orchard of Kabbalah

Ayin Hara and the Red Bracelet