There are twenty-two letters in the Hebrew Aleph-bet (alphabet). This brief overview will define three of them, Dalet, Hei, and Vav, and go over the basics of their mystical interpretations. In Mormon Kabbalah, these letters are used for spiritual communication in ways that do not require one to be fluent in the language. These letters help us gain a direct spiritual communication going beyond mere words. Meditation with the letters is a common practice in Kabbalah to help facilitate spiritual growth.

While reading through this, look for the deeper meanings of each letter. All are also encouraged to study outside resources to deepen our understanding beyond what this simple text provides. As Kabbalists study and meditate over the years, we gain greater incites to the inner spiritual meanings of the letters. 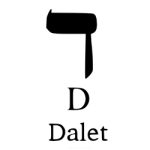 Dalet (dāleth, Daleth or Daled, or Dallet) is the fourth letter of the the Hebrew Alphabet. It signifies the number four. Dalet literally means “door” or “gate,” representing the doorway between Ego (the sin, or general state of selflessness) and the altruism/humility we must obtain to pass through it (2 Nephi 14:5 RAV/32:4 OPV, Matthew 7:7, Revelation 3:20). Through our internal Dalet we pass through the gates and return to the power of the Aleph, becoming a part of the oneness and unity of God.

Dalet is shaped as a man bent in humility and receptiveness. It represents the nullification of Ego. It is through this humility we gain the understanding that as humans, we have nothing of our own (Mosiah 2:28-36 RAV, 4:16-21 OPV). We are dependent entirely on God. With this understanding we gain the diligence required to receive the light. Representing structure, Dalet is in the form of a grid; a horizontal and vertical line. It gives us structure and form, which represent the need to study and learn. This also gives it a stair-step-like appearance. Our knowledge and growth builds the stairway within us to heaven. Dalet is one of the names of God in Judaism. Four is also the actual number of Gods in the trinity or Godhead. It denotes the four elements and the four corners of the earth. 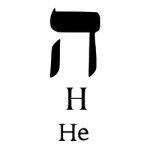 Hei (or He) is the fifth letter in the Hebrew Alphabet. It signifies the number 5, or 5,000 when referring to years. Representing divine revelation, it is said the world was created with the utterance of Hei. In this way Hei is the feminine Goddess, the revelation. It is through the feminine we gain wisdom, and thus free will—the freedom of choice. It represents the gift of life, both created and spiritual life. In Kabbalah, it is the symbol of feminine divinity, gentility, and specificity.

In Judaism, many Jews use Hei as a way of saying “God” without actually saying the name of God. It is an abbreviation of the term “Hashem,” which means “The Name.”  Through Hei we gain the freedom of choice. We have walked through the doorway and climbed the stairway of Delet. We now gain an audience with God. No longer trapped by sin, we have regained our free agency. 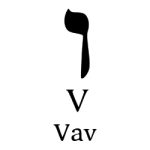 Vav (or waw, or wav, or vaw,) is the sixth letter of the Hebrew Alphabet. It signifies the number 6, or 6,000 when referring to years. Vav is shaped like a hook. It has the power to unite everything that is separated in creation. It represents kav, Hebrew for “window.” It connects God’s perfection to the created world. God guides existence step by step. Within us, this refers to the guidance to, eventually, the perfect unity to God through Christ. It is a window through which we may see all God has revealed.

Through the window of Vav we gain the direct light of God, given to us through Christ, filling us with the Holy Spirit. Vav contains the power to connect the heavens and earth. This is Jacob’s ladder, rooted in earth, extended into the heavens. It is the priesthood, the power of God, sent from above down to mankind, God’s created beings. It represents the six days of the creation of the world, and thus the six stages of teshuvah.

Vav also reminds us of the six physical dimensions: right to left, front to back, up to down.  It can teach us the state of constant presence needed to connect our own heaven and earth (physical and spiritual aspects.

Ordinances of the Saints 2020

The Tzitzit and the Law

The vav also just like you have said represents the light, but this is not just any light but the light that fills the entire creation
When God said let light be and light was, it was the vav, the light that binded the creation, both in the heavens and on earth
Let me talk about the hei alittle bit. The Hei is formed by the dalet and the vav, yet also the dalet is formed by two vavs, the vertical and the horizontal, so it is also correct to say that the Hei is formed by two vavs and the inverted yod
The name used for creation is the LORD, that is (Hei) Yod Hei Vav Hei but listen the Yod that comes first comes from the silent Hei behind the name. And when God said let light be, one vav from the two vavs of the dalet approached the yod and the yod was covered by the vav hence the light, and only one vav is left, the unapproachable light where the Father dwells in the unseen