One of the most well known traditions in Kabbalah may be the red or scarlet bracelet worn by practitioners. It is חוט השני, Hebrew for “scarlet string.” It is worn as a talisman to ward off misfortune said to be brought about by עין הרע (ayin hara), the “evil eye.” In Mormon Kabbalah we also carry out this tradition. 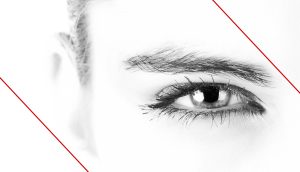 “Therefore one who has ayin hara, the evil eye—that is, one who is naturally envious and jealous in disposition—is biased by the spirit of evil; and the sphere wherein they move becomes a power of evil to others and should be avoided, in order to escape injury from them.” -Zohar ‘Why the Animal was Destroyed by the Deluge’ vs 20-21

While the scarlet bracelet is not mentioned in the scriptures, it is a tradition in a number of cultures. Hindus, for example, have the Kautuka, which uses one yellow and one red string together for ritual protection. In Christianity red is a symbol of Pentecost. Wearing a red bracelet on the left wrist may be worn by fellow Christians as a symbol of fire (Holy Spirit) and blood (Christ), or the martyred Saints. Today it is common to see elderly women selling red string bracelets in Israel, particularly in Jerusalem, to Christians and Jews alike.

In the United States, the red string began to grow favor in the 1990’s. Celebrities began wearing them as they joined Philip Berg’s “Kabbalah Center.” This is an example of a religious tradition being used by the masses of popular culture. We’ve seen similar things happen with the Christian Cross, and a number of different traditional symbols.

Some of the traditional benefits the scarlet bracelet is said to bless us with:

While the scarlet bracelet is not mentioned in the scriptures, as stated previously, there are a few ties to it, according to tradition and observation. 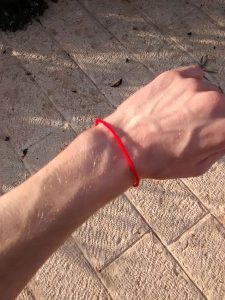 The most common scripture referenced in relation to the scarlet string is likely Genesis 38:37-30:

And it came to pass in the time of her travail, that, behold, twins were in her womb. And it came to pass, when she travailed, that the one put out his hand: and the midwife took and bound upon his hand a scarlet thread, saying, ‘This came out first.’  And it came to pass, as he drew back his hand, that, behold, his brother came out: and she said, ‘How hast thou broken forth? this breach be upon thee: therefore his name was called Pharez.’ And afterward came out his brother, that had the scarlet thread upon his hand: and his name was called Zarah.”

In Kabbalistic teachings, we learn of mankind’s duality: good and evil, light and darkness; also male and female, spiritual and worldly, etc. The scarlet bracelet reminds us of our spiritual path, as the left is the spiritual or receiving side, the right the physical, the giving. God’s left hand is the Holy Spirit, justice. His right hand is Jesus Christ, mercy. The twins in this story show both duality, but also that without the string the midwife would not have known which child actually came out first. It is good to have physical reminders of spiritual things.

“Behold, when we come into the land, thou shalt bind this line of scarlet thread in the window which thou didst let us down by: and thou shalt bring thy father, and thy mother, and thy brethren, and all thy father’s household, home unto thee.” -Joshua 2:18

In the Book of Joshua, Rahab saves the Israelite spies. She uses a scarlet thread in her window as a sign that she may be spared when the Israelites attack the city of of Jericho (Joshua 2:12-22). This is very reminiscent of the the scarlet bracelet being a protection.

“She is not afraid of the snow for her household: for all her household are clothed with scarlet.” -Proverbs 31:21

In Proverbs 31, starting in verse ten, king Lemuel asks how to find a virtuous woman. One item on his list: she clothes her household in scarlet for protection.

While scarlet is mention a number of times in the scriptures. One of the most well known is Isaiah 1:18. This chapter speaks of the Lord’s disappointment with Israel.

“I am full of the burnt offerings of rams, and the fat of fed beasts; and I delight not in the blood of bullocks, or of lambs, or of he goats… Wash you, make you clean; put away the evil of your doings from before mine eyes; cease to do evil; learn to do well; seek judgment, relieve the oppressed, judge the fatherless, plead for the widow.” -Isaiah 1:11, 16-17

While we are perfected in Christ, we are still to grow in Grace. We cannot cycle through rituals believing there is no sin in us. Christ shields us from judgement. As we grow in His Grace, we do greater works in His name. The scarlet bracelet reminds us to do His works.

Paul to the Hebrews

In Hebrews 9, Paul speaks of Christ being the mediator of the New Covenant.

“when Moses had spoken every precept to all the people according to the law, he took the blood of calves and of goats, with water, and scarlet wool, and hyssop, and sprinkled both the book, and all the people, saying: ‘This is the blood of the testament which God hath enjoined unto you.’ …And almost all things are by the law purged with blood; and without shedding of blood is no remission… Christ was once offered to bear the sins of many; and unto them that look for him shall he appear the second time without sin unto salvation.” -Hebrews 9:19-20, 22, 28

The scarlet represents the blood of Christ, shed for us that we may come to Him with a new sacrifice: a broken heart and a contrite spirit. This is what the Lord was truly seeking when speaking to Israel in Isaiah 1. The scarlet bracelet reminds us that we are a part of the New Covenant. 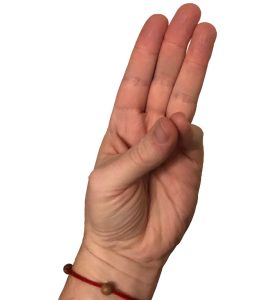 Being a part of the New and Everlasting Covenant, we wear the scarlet bracelet for the same reasons as other Kabbalists. Yet, to us we add Christ to its meaning. When prayerfully making my scarlet bracelet, I felt prompted to use the traditional wool, as the scarlet represents the blood of the Lamb, Jesus Christ. I also felt inspired to use two red strings for the duality; the old and new worlds, the Levitical and High Priesthoods, the Bible and the Book of Mormon, etc.

To unite these twin strings, I used three wooden balls. These represent the Father, Son, and Holy Spirit; the trinity or Godhead. I feel that other items may be used, an eye, a cross, and a dove, for example. Putting the Hand of Miriam or the Star of David on the bracelet are also very traditional. The Hand of Miriam is the symbol used for Mormon Kabbalah, and makes sense for members of this Priesthood.

The center ball had both ends of both strings in it, creating a circle. I blessed the string with a simple prayer over it, and asked my wife to tie the knots. The person that ties the seven knots should be a trusted loved one. It is not required they hold the Priesthood, as the string should be blessed beforehand.

While they are tying the knots, your loved and/or trusted one should recite the Ana Be’Co’ach prayer: 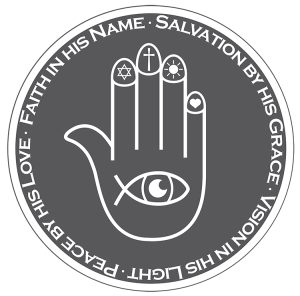 The Tzitzit and the Law

Some genuinely nice stuff on this internet site, I enjoy it.

So, right at the very beginning, before a si gle written word, you chose the one Eye symbol of the antichrist to start your article??!

You are either deceived entirely or a liar entirely.

The all seeing eye of God is a Christian symbol that has been used to represent God for hundreds of years. Sadly, the enemy twists God’s symbols for use as well. We see this in other symbols common to Christianity; the fish being used as a vagina, St. Peter’s cross used to represent the evil one, Christ’s crucifix to mock our Lord and Savior likely being the worst offender.