There are twenty-two letters in the Hebrew Aleph-bet (alphabet). This brief overview will define three of them, Yod, Kaf, and Lamed, going over the basics of their mystical interpretations. In Mormon Kabbalah, these letters are used for spiritual communication in ways that do not require one to be fluent in the language. These letters help us gain a direct spiritual communication going beyond mere words. Meditation with the letters is a common practice in Kabbalah to help facilitate spiritual growth. While reading through these letters, look for the deeper meanings of each. All are also encouraged to study outside resources to deepen our understanding beyond what this simple text provides. As Kabbalists study and meditate over the years, we gain greater incites to the inner spiritual meanings of the letters. 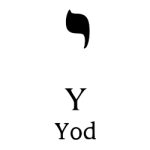 Yod (also spelled yud, yodh, jod, or jodh) is the tenth letter of the Hebrew Alphabet. It signifies the number 10. Yod represents or is a name for God as the creator. It represents the point from which all of creation emerges. It reminds us of the unity within multiplicity. Yod is the foundation, the hidden spark of the divine which causes everything to be.

The holy name, THVY (Yahveh), starts with Yod. It is small in size, compared to the other letters of the aleph-bet, signifying the greatness of Yodt. According to traditional Kabbalah, all of creation came forth from a single point. Thus, Yof represents God’s infinite presence within the finite world.

We see Yod as a single point, yet it represents 10. This teaches us the unity within multiplicity. This is particularly true in light of the 10 sephirot of the Tree of Life; one tree comprised of ten parts. In the Gospel of Matthew, Jesus says: “One jot shall in no wise pass from the law, till all be fulfilled” (5:18). The jot he is speaking of refers to the letter Yud. 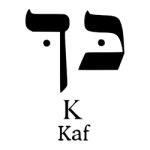 Kaf (or khaf, or kaph) is the eleventh letter of the the Hebrew Alphabet.  It signifies the number 20, or 500 when in its final form. Khaf literally means “monkey.” It is like a cupped outstretched palm, ready to receive, like the right hand portion of the Second Token of the Lesser Priesthood, and the left hand portion of the First Token of the Higher Priesthood mudras. Kaf represents form, a form that contains the life and energy of the person using it. Being a chalice sign, it also represents Jesus Christ and the element of water.

The letter of formation, bending the straight line into a curved shape, symbolizes the crown of the Torah which is Keter כתר.  Khaf teaches us to shape ourselves, we are liquid bending the ego to the shape our character, Christ. Kaf (representing Christ) is what gives us form. As we bend and govern our tendencies, we shape our character. We can only do this by rejecting Ego for humility. Like a potter shaping clay, Kaf recreates us in God’s image. All possibilities of containing, building, and the formation of all existence are represented. Remember, Christ is the creator of worlds. We recreate ourselves through his mercy, if not then the fire of the Holy Spirit would burn us to cinder. Thus Kaf changes us by reminding us of who we really are. 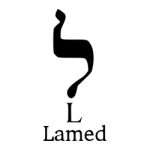 Lamed (or Lammed or Lamedh) is the twelfth letter of the Hebrew Alphabet. It signifies the number 30. Lamed is translated literally to “learning,” and so that is what it represents. it’s shape is that of a a shepherd’s stick, representing a pastoral staff.  It is tied to Tzadikim NistarimIt, the 36 righteous people that keep the world from ending.

Located at the center of the aleph-beith, Lamed represents the heart (Lev לב). In Mormon Kabbalah, this means the burning bosom, where the Holy Spirit speaks to us. Thus we learn not merely with the mind, but by revelation from God to our hearts, minds, and souls. Spiritual learning is the heart of human existence. The purpose of Mormon Kabbalah, and in fact, out mortal lives, is to learn and express spiritual teachings and practices.

Like a lighthouse high above a cliff, Lamed helps us see past the storms. Kaf shapes us, Lamed (learning) is how we are shaped. Lamed represents constant change, as we learn we grow. Thus it teaches us to learn from everything in life, by blocking the Ego and gaining spiritual perfection through Jesus Christ, We learn the Law, the will, and ways of God, aligning ourselves with and becoming one with God.

Calling and Election made Sure and the Second Anointing

And a Contrite Spirit