“Kabbalah is a mysticism, a theology, and a thaumaturgy; Kabbalah is the tradition of Israel, it is my doctrine, and thus it is a mysterious art, for my doctrine is too simple for mankind to comprehend.” -Doctrines of the Saints 125:7-8 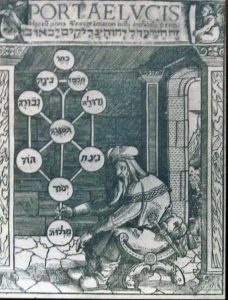 Kabbalah, Hebrew קַבָּלָה comes from the root קבָּל meaning “reception.” While there are many meanings to the term Kabbalah, including “reception,” “tradition,” or “correspondence,” the idea of receiving is one common understanding between all the various schools. Historically speaking, Jewish Kabbalists developed their own sacred texts and  use classical Jewish scriptures to explain and use mystical teachings. Though there are many schools, in modern Judaism Lurianic Kabbalah is most widely taught and practiced.

Jewish Kabbalah came out of what is known as Merkabah mysticism and Hekhalot literature. These were focused in part with the idea of descending to the throne of God. With ideas of using signs, words, and keys to get past angels to get into heaven and gain access to the throne of God, ideas found in Merkabah mysticism and Hekhalot literature might have been very at home to the early Brighamites, and to many fundamentalists in that branch of our movement today. Though practitioners generally believe that Kabbalah is from an oral Torah given by Moses or even from Adam, coming out of the garden of Eden itself, Jewish Kabbalah actually came to be around the 12th century.

However, this doesn’t mean that Jewish Kabbalah isn’t as old as it claims to be. The main text of Lurianic Kabbalah is the Zohar, a collection of writings that include a commentary on the mystical aspects of the Torah, more especially Genesis. The Zohar focuses on mysticism, mythical cosmogony, and mystical psychology. It is attributed to Shimon bar Yochai, also known as the Rashbi. However, it is more likely written by Moses de León in Spain. But, like the Book of Mormon, that doesn’t mean that Moses de León wrote it. It may have been given by God to the Jews as a form of restoration of their religion. One of the main points of the Zohar is strict observance to the Torah and it is written as a type of Midrash, making the style more familiar to the Jewish people.

Kabbalah in Judaism has gone in and out of style. It is currently seeing a resurgence. 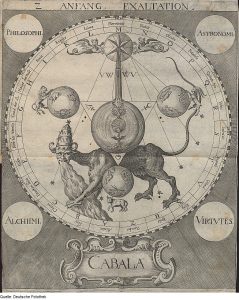 During the Renaissance, Christian scholars became very interested in Jewish mysticism, especially Kabbalah. These scholars saw the Jewish people as having secrets that they believed they, the Jews couldn’t understand because of their rejection of Jesus as the Messiah. They then took Jewish ideas and reinterpreted them to fit with Christian theology. For example, the upper three Sephirot on the tree of life became the Trinity, with the other seven the earthly world. And this does fit, as the lower seven are the days of Creation. One of the beautiful things about the Sefirot is that they can be interpreted in so many ways.

During this same time period, Hermetic Qabalah arose alongside Christian Cabala, creating what we see today, a variety of Esoteric Christian, non-Christian, or even anti-Christian schools. Hermetic Qabalah draws on not only Kabbalah, but astrology, Alchemy, Pagan religions, neoplatonism, Gnosticism, hermeticism, and more. Hermetic Qabalah differs from the Jewish form in being a more admittedly syncretic system, however it shares many concepts with Jewish Kabbalah. It is the underlying philosophy and framework for a number of magical societies, like the Golden Dawn, and the Fellowship of the Rosy Cross. It would be impossible to go into detail on Hermetic Qabalah without getting into a number of esoteric and occult ideas, practices, and philosophies. And remembering that occult means secret, the task is even more difficult. 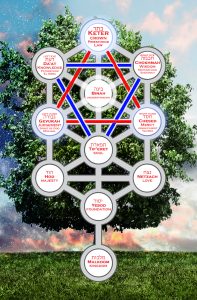 Mormon Kabbalah is a new concept that arose in March of 2018 when the Lord told me to unite God’s people in Kabbalah. This may seem a contradiction to God’s command to Latter Day Saints to “preach unto the world, saying: You must repent and be baptized in the name of Jesus Christ” (Doctrines of the Saints 12a:59; DaC 16:6c2-d1 RLDS/CoC, 18:41 CJCLdS). But with the understanding of repentance as “teshuvah,” returning to God, and the Kabalistic understanding that Israel means “Yashar-El, the path Straight to God,” then the idea that we would be united in receiving makes perfect sense (DoS2g:20-26). Mormon Kabbalah is about building a personal relationship with God, the very nature of true repentance.

We have been told that Kabbalah is a mysticism. Mysticism is the understanding that union with God may be attained through contemplation and surrendering ourselves to God. Or as Jesus put it, “not my will, but thine, be done” (John 22:42). Kabbalah and mysticism, according to the same revelation, is a theology, and a thaumaturgy. Theology is the study of who God is, the nature of God, and religious beliefs in general. We are to build our own theologies, our own personal understanding of God. Thaumaturgy is miracle working, the gifts of the Spirit.

Anyone can study Kabbalah as it is ” too simple for mankind to comprehend.” This reminds me of Nephi:

I have said before that the teaching of Kabbalah can be summed up in “love God, love thy neighbor.” Beyond this, Mormon Kabbalah is perception. It is putting an end to looking at the scriptures to support the ideas of men, to use the Word of God as weapons against our fellows, or to build churches of men. Rather, it is to see the world as a mirror, to fix our broken selves, and understand that this is enough.

Mormon Kabbalah is a return to the marriage covenant between Israel and God, with a broken heart and a contrite spirt. As we build our own personal relationship with God, our evangelism becomes our actions, rather than our words. We don’t need to seek out those looking for God, the Lord will send them to us. And by returning to God personally, we are doing our part to heal the creation. Mormon Kabbalah is an invitation to receive God, personally, into your life.

Thoughts from the Teacher