“Behold, that great city Zarahemla have I burned with fire, and the inhabitants thereof.” -3 Nephi 4:11 RAV, 4:28 OPV

I’ve seen a number of posts on social media basically stating that God murders children. The idea is that when Jesus was crucified, the cities in the New World that were destroyed meant that innocent children were killed as well. At one point another gentleman, a faithful Latter-day Saint, pointed out that the same thing happened with the destruction of Sodom and Gomorrah in defense of the cities destroyed in the Book of Mormon. However, this really misses the point of the scripture.

The first argument is simple, we cannot verify that these cities existed. We don’t know if there was a Zarahemla, or a Sodom and Gomorrah. The scriptures were not written to teach us history, but to bring us closer to God. In Kabbalah, when we read the scriptures we are everyone in every story. We are Moses, and we are the Pharaoh. We are David, and we are Goliath. We are Paul, and we are Stephan. We are Nephi, and we are Laman. With this in mind, I’m going to go over three stories in the scriptures from a kabbalistic point of view.

“Then the Lord rained upon Sodom and upon Gomorrah brimstone and fire from the Lord out of heaven; and he overthrew those cities, and all the plain, and all the inhabitants of the cities, and that which grew upon the ground.” -Genesis 19:24-25 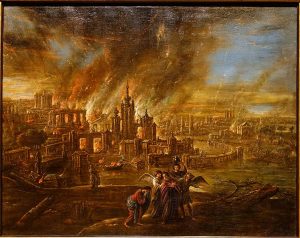 In the story of Sodom and Gomorrah the people were wicked. They were so wicked that when Abraham asked the Lord to spare them, there were not even 10 righteous people to be found (Genesis 18). Their sins were clearly stated in Ezekiel 16:49-50:

These abominations led God to take them, except from the Kabbalistic perspective, we are the people that were destroyed. We are Lot and his family fleeing. We are Lot’s wife turning to salt (Genesis 19). What then is this story about?

When we come to Christ, when we are born again, God purges the sin from us. The Holy Spirit cleanses with fire the Sodom and Gomorrah in us. Our doubts are turned to salt. But like Lot’s daughters we don’t fully understand what’s going on. Like Lot we still have sin and need to grow in grace.

“And they brought their wives and children together; and whosoever believed or had been taught to believe in the Word of God, they caused that they should be cast into the fire.” -Alma 10:45 RAV, 14:8a OPV

After teaching the people of Ammonihah, Alma and Amulek are arrested. Their followers, women and children included, were put to death. This sounds horrible, but remember these people are me, they are you. When we are converted we still have Ego inside us, and Ego does not wish us to serve God. Ego only wishes to serve self. Thus Ego puts to death all our righteous desires, or tries to.

Eventually Alma and Amulek, our desires to follow Christ and grow in His grace, call upon God to destroy the wicked Egoistic desires. And, they return find the righteous desires hiding outside the city and nourish and strengthen them. Conversion isn’t just Sodom and Gomorrah with all our Egoistic desires being destroyed, it is a process.

The City of Zarahemla

“And the city of Zarahemla did take fire… And many great and notable cities were sunk, and many were burned, and many were shaken till the buildings thereof had fallen to the earth, and the inhabitants thereof were slain, and the places were left desolate.” -3 Nephi 4:8, 11 RAV, 8:8, 14 OPV

As we grow in Grace, the Holy Spirit helps us purge our worldly Egoistic desires until our relationship with God grows to the point where we finally hear Him and understand. With Sodom and Gomorrah we fled the destruction and were made perfect in Christ, but our understanding wasn’t were it needed to be. In the land of Ammonihah, our more altruistic parts converted many of our egoistic desires to altruistic ones, but the internal struggle continued.

When Zarahemla and other major cities were destroyed, God is purging young Egoist desires, males and females Egoistic desires and we are left for a moment in darkness. We are unsure what to do. Then we hear the voice:

The battle isn’t over, but we’ve come to a reprieve. God restores us to that perfect state we came from Him in, even if for just a moment. We’ve listened to others preach to us, but now we are ministered to by Christ. This may be literal, spiritual, or symbolic. It may happen once in a lifetime or repeatedly. Regardless, it is real. It is transformative. And, it is up to us to continue on the path it sets us on.

In the Book of Mormon, 3 Nephi continues with a Utopian society where everyone is one. The people follow the spirit of ubuntu, altruistically caring for one another; they love God and serve Him by loving their neighbors. However, a few generations later in 4 Nephi, Ego is back. A new generation of desires follows Ego, rebelling against God. Thus we see it is possible to receive Christ and backslide if we do not endure to the end. I recommend one write down sacred experiences like these, as the personal scripture and testimony can help us overcome these young, new bouts of Egoism.

When these questions are answered, God is speaking to us through the scriptures and the Holy Spirit. When these questions cannot be answered, God doesn’t have a message for you in them yet. Yes, we are made perfect the moment we accept the blood of Christ. And, we keep reading, keep learning, keep growing in Grace, and continue to deepen the relationship between God and man as we are so moved by the Holy Spirit to do God’s works. By doing this, we can and will endure to the end.

Finding Your Identity in Christ

I appreciate, cause I found exactly what I was looking for. You’ve ended my four day long hunt! God Bless you man. Have a great day. Bye