“And it came to pass that he built an altar of stones, and made an offering unto the Lord, and gave thanks unto the Lord our God.” -1 Nephi 1:34 RAV, 2:7 OPV

As disciples and worshipers of Christ, the first temple in our lives is our bodies. To create a sacred space for home worship, meditation, and other spiritual needs, our second temple is our home temple. For this, members and ministers may have a temple altar in their homes. There they may bless and pass the Sacrament of Communion, receive and share Initiatories and Endowments, and gather with other saints around the altar in the various orders of prayer.

Disciples too may have altars in their home temples. Their altars may be used for prayer and meditation, and used by ministers when they visit. Disciples should pray to seek guidance as to having an altar, personal revelation will guide and direct them. Overall, there’s no reason to think one cannot have one in their home. 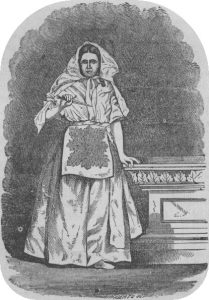 An altar can be as simple as the top of a short bookcase, or an actual dedicated small table. One will kneel at the altar to bless the sacrament of communion and for other rituals, so it shouldn’t be too high. One may use a plain white cotton cloth both to cover the altar and to over the bread and water or wine until it is being blessed.

On the altar may sit one’s Rod of Aaron (Avahr 18:13), Communion plate or Panticle, Communion cup or Chalice, and Athame. Each represents East, West, North, and South receptively. Early Latter Day Saints had these tools, mirroring what they gleaned from both scriptures and revelations.

It is recommended one set their personal or family altar to the East. If so moved by the Spirit, place a picture of Jesus Christ in a manner that He would be looking at those facing the altar from the East. All Altars should either face North or East, whichever feels right. The Magi of the Bible followed the Star in the East (Matthew 2: 2; KJV). And, in the Old Testament, the “glory of the God of Israel” comes from the East (Ezekiel 43: 2; KJV).

The lost tribes of Israel went North, so one could also place their altar to the North as well, as the Freemasons do. Joseph Smith Sr. and Jr. and many other early Saints were Masons and would have felt comfortable doing this. Just pray for revelation, feel it out, and do as the Holy Spirit directs.

To consecrate or dedicate the Altar put your hands just above the top of it and pray to the Lord, offering it as space to him, as we did the temple space. Then put the cloth down, stating you’re doing so to create a Holy covering to keep clean the things of the Lord.

To finish, preform the sacrament of Communion at the altar. When this is concluded, place your hands again over the altar to feel if things were done correctly. If done properly, one will feel at peace.

“…the people …began to humble themselves before God, and began to assemble themselves together at their sanctuaries to worship God before the altar, watching and praying continually, that they might be delivered from Satan, and from death, and from destruction.” -Alma 10:108 RAV, 15:17 OPV

7 Names of God from the Torah

I love the idea of having an altar in our home. We dedicated part of our living room to be our temple and now we have Family home Evening in the temple on Mondays. By adding an altar we’ll now have the sacrament too! The Holy Ghost is felt stronger and stronger in our home thanks to the advice from this blog. I hope you talk about the tools you’ve mentioned at some point.