“Master, Moses wrote unto us, If a man’s brother die, and leave his wife behind him, and leave no children, that his brother should take his wife, and raise up seed unto his brother. Now there were seven brethren: and the first took a wife, and dying left no seed. And the second took her, and died, neither left he any seed: and the third likewise. And the seven had her, and left no seed: last of all the woman died also. In the resurrection therefore, when they shall rise, whose wife shall she be of them? for the seven had her to wife. And Jesus answering said unto them, Do ye not therefore err, because ye know not the scriptures, neither the power of God? For when they shall rise from the dead, they neither marry, nor are given in marriage; but are as the angels which are in heaven.” -Mark 12:19-25

“Behold, here is wisdom: The sons and daughters of Elohim will marry and be given of marriage in the flesh; yet in the resurrection all things shall be restored, and none shall marry nor be given of marriage; for in the resurrection all shall be as one, as it was before the world was; and these shall be brothers and sisters as all are creations of Elohim. Yea, at the first time they are sons and daughters, brothers and sisters, in the creation of Elohim; yea and these are even the Sons and Daughters of God; and at the end of the final resurrection, they that shall rise in righteousness shall all be sealed as one, to restore that which was taken in the flesh to its purest form.” -Doctrines of the Saints 17d:8-12 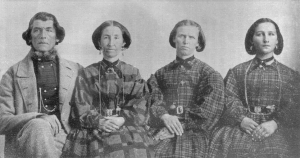 “Behold, my servant Joseph did take unto himself many wives, even wives that had been promised to another… But behold, not all of his wives were sought in a manner pleasing unto me; for behold, his wife, Emma, knew of these things, yet she suffered greatly in her heart. And some that he sought to take to wife he took with impatience, and these were not full grown into maturity; yea, and there was deceit among my Saints, thinking that a woman being sealed to one of my servants would place their family higher unto me: Behold, it is I and I alone that have provided the grace sufficient for saving the souls of man; and this sealing power was given unto my servant to make that which is on earth as it is in heaven, that the Father’s will be done on the earth as it is in Heaven.” -Doctrines of the Saints 17d:19, 22-26

For more information of the Fellowship’s theologies on marriage, please see Doctrines of the Saints 16-18.

Image: Portrait of Ira Eldredge with his three wives: Nancy Black Eldredge, Hannah Mariah Savage Eldredge, and Helvig Marie Andersen Eldredge, 1864. (Ira was bishop of the Sugar House ward at the time the image was taken.)

Making the Shift from the Church Age to the Kingdom Age

The Hidden Book of Moses