If ye have desires to serve God, ye are called to the work: for behold, the field is white already to harvest, and lo, he that thrusteth in his sickle with his might, the same layeth up in store that he perish not, but bringeth salvation to his soul; and faith, hope, charity, and love, with an eye single to the glory of God, qualifies him for the work.” -Avahr 13:5-7

In the Church of Jesus Christ anyone may be called to the ministry from any walk of life. This brief overview has been created to help those seeking to know God’s will for them, in their ministries, as Deacons.

Within the Church of Jesus Christ in Christian Fellowship, there are two priesthoods ministers may be called to: the Low and the High. The Low is called the Levitical Priesthood. For those that identify as male this would be in the Brotherhood of Aaron or the Aaronic Priesthood, and for those that identify as female the Sisterhood of Miriam or the Miriamic Priesthood. The Levitical Priesthood is for those called to serve the Church and preform outer ordinances. They also teach the Gospel and assist the High Priesthood in their duties. Their role is to prepare the earth for the coming of the heavens. The keys of the Priesthood give us access to true powers from God. 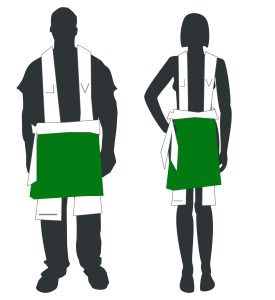 The Deacon, known in Hebrew as a Shamash, is the caretaker of the synagogues and temples. Deacon is both the first office of the Levitical Priesthood and a calling. Once ordained they are initiated and given their new name and their garments. After receiving these, they are to be given the first token of the Levitical Priesthood, its name, and its sign. With these they are given the apron and gartel to wear over their garments (DoS 15e:7). They should wear these when acting in their duties. When gathered as a quorum, or with the teachers, they are to welcome one another with their signs and tokens (DoS 15e:8). It should noted that Deacons are not to cover their heads or their of their faces when preforming their duties  (DoS 114:27).

There are Three Degrees in the Deaconship: Marshals, Stewards, and Ministers (BoL 36:15).

A Marshal or Shepheard is a scribe or writer, one who keeps notes and journals for the Church (Judges 5:14, DoS 8a:4). They also function to help maintain discipline (BoL 25:6, 1 Maccabees 5:42). Think of this degree as those who assist the Pastor or Bishopric set things in order. This is the First Degree.

A Steward is one who cares for the flock, the congregation, assisting the Teachers. This Second Degree does not take from the First, but adds responsibilities to it. They see to the affairs of the congregation. Their duties may include helping to maintain the synagogues and temples, the grounds, and any transactions put into their trust.

The Third Degree of Minister grants a Deacon the authority to assist in church worship as a member of the clergy. Minster is the only Degree of Deacon to serve at the altar, assisting the Priests. They may be asked to preform such duties as passing the Sacrament of Communion.

Deacons ordained to the Levitical Priesthood in the Fellowship do not travel, but all Deacons are to “warn, expound, exhort, teach, and invite all to come to Christ” (DoS 2a:55, 51a:11).

A quorum of Deacons is overseen by a High Priest called a the First Deacon, who presides over 12 Deacons (DoS 5a:24, 6b:12-14). The First Deacon would always be of the Third Degree, as they act as the Rabbi over their fellow Deacons and the Teachers. It is the responsibility of the First Deacon to teach the quorum their duties. The First Deacon may call a Second Deacon as the Rabbi over the Teachers (DoS 6b:13). The First and Second Deacons are the co-presidents of the Deacons and Teachers of a congregation. Thus, one would be called from the Brotherhood of Christ, and one from the Sisterhood. Deacons are called to watch over the Church and may assist the Teachers and sign membership letters (DoS 2a:54, 76, 51:11). Those called to serve the Church in the office of Deacon must be called and sustained by the voice of the congregation, and set apart as such (DoS 6a:6, 9:19).

“I am introducing to you our sister Phoebe, the Deacon of the congregation at Cenchrea” -Romans 16:1

Christ and the Spirit of Ubuntu

What’s in a Name